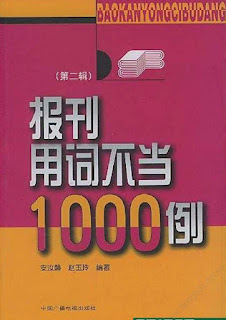 In support of the leadership of China Radio and Television Press and edited, the "press misnomer 1000 cases" published in January 2001. Considering the misnomer is the most common language newspapers disease, editors hand there are a lot of material ready, use nearly a year of time and preparation of the "press of a misnomer 1000 cases" (II).
The closing of this series is the first series of entries that are not the majority, but was the same with the first series in the style and wording from misunderstanding meaning, appraise properly, related terms do not match, repeat and word forms without excess respect norms of misuse instance, and put forward amendments.
Download
Copy the password

There was an error opening this document. The file is damaged and could not be repaired.

Hi, it maybe your problem. Please use Adobe Acrobat Reader 9.0 or above to open.
Thank you!