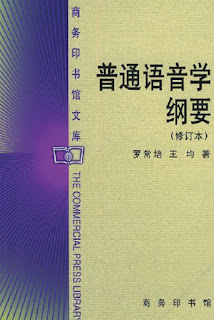 Once the first draft of this book in the name of Tian Gong "phonetics common sense", in the "Chinese Language" on from January 1954 to May 1955 serialized 14. Now heavier amended deletions, compiled this little book.

Peking University from 1934 to teach me since, has opened several phonetics class, but has not been thoroughly compiled handouts or textbook. Until the fall of 1952, I and Wang comrades in Peking language phonetics and opened special training course before going to update the information accumulated over the years of division of labor to supplement compiled a textbook for nurturing young comrades to lay a foundation. This book is the outcome of the plan to achieve this unit.

The style of this book is the general principle applied phonetics, contact the specific reality of Chinese language, cited examples mainly in Mandarin, Mandarin dialect not then move around, to cite fraternal Chinese nation's language does not have, to complement China Language does not have sound, or to facilitate comparison on only cite some examples of foreign languages, are provided for the reference card. About phonetics theory advanced as far as possible the doctrine of the Soviet Union, but also draws on other countries phonetics works some good parts.
Download
Copy the password