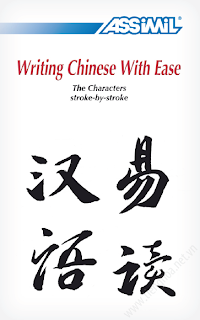 This book aims to take users from scratch to having a solid base in the language within six months, and to feel comfortable in as little as three months. In only half an hour a day, users will move ahead naturally until they are at ease with all the basic structures needed for communication and become familiar with the basic words and grammar. The method comprises two phases: the passive phase, in which users simply repeat what they hear and read, and the active phase, in which users begin to create sentences and imagine themselves in a variety of everyday situations.

Using this book you will learn the fundamentals of Chinese writing - via the study of the 800 most common characters of modern Chinese.

By explaining their composition stroke-by-stroke, this book will teach you to write beautiful Chinese characters.

The useful appendices included at the end of Writing Chinese with Ease, such as the bilingual Index to Chinese characters and the Table of Radicals, are the equivalent of your first Chinese-English dictionary.
Download
Copy the password

the link for book is broken. please update an alternate link. thanks again for all support

Hi Allan
The link has been fixed