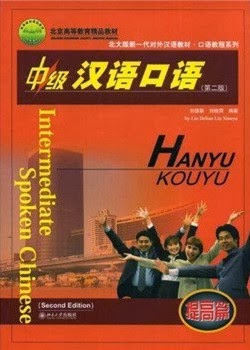 This is a very good series of textbooks for developing the learner’s ability to communicate orally and has six books in total, two for each level (elementary, intermediate and advanced.) There are also two other textbooks that act as crossover points between the three levels

Being a spoken textbook series the lesson texts up to intermediate level are based entirely upon dialogues between a small set of friends studying and living in China. The advanced level textbooks introduce non-dialogue based texts alongside the dialogues, whilst the “quasai-advanced” textbook, which feels like an add-on to the series, strangely drops the dialogues completely. The texts are not only practical but also interesting. For example in one dialogue one of the female characters questions a friend about the boy she saw her with, thinking it was a secret boyfriend, but it turns out to have been her brother. The series is full of colloquial expressions that will not only make it easier to communicate verbally, but also make the learners speaking sound more natural. The voce acting in the recordings is also not bad, bringing the dialogues to life and making it easier to study, whilst the grammar explanations are clear and simple.

The downside to this series is that although it assumes the reader is also learning to read and write it does not itself feature reading and writing exercises. At Chinese universities this textbook is often used for oral classes with other dedicated textbooks being used for reading and writing classes. Once the student knows how to write Chinese characters this series can be used alone but time needs to be spent practicing writing the sentence structures and new vocabulary that are introduced. Also, some of the spoken phrases in this series are slang phrases that are particular to northern China and not used in areas such as Shanghai or Guangzhou.

Due to the oral nature of this this series any learner using this book alone will of course be able to speak well and have little trouble reading spoken Chinese, such as text messages and social networking site posts. However, relying on this series alone they will have trouble reading more formal non-spoken Chinese, such as newspapers and magazines.