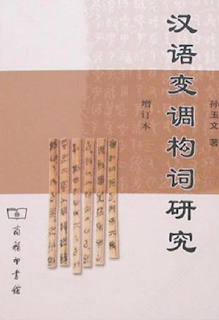 Morphology refers to the use of new words tone tone conversion tectonic significance associated , affiliated tone morphological change . The book symposium morphological tone . Archaic tone system uses Mr. Wang Li ingrowth into the rhyme of short insights into ; and that the yin and yang rhyme rhyme sub level up three times . Middle tone sound system using "Rhyme " and "Yun" tone class system . Ancient times into the use of short- and long- term into the new structure of the conversion , as well as the use of ancient times or the Middle Ages conversion level up construction of new words that part of the word , is the range of topics discussed in this book . "Introduction" section confessed tone morphological definition of the principle of the book 's closing words , tone morphological study data modulation brief history of morphological studies , the scope of the closing words of the book , and the purpose of the study. "Introduction" is divided into two chapters later . Chapter One : Ancient Chinese tone vocabulary word formation . Tone morphological phenomenon has received a total of 100 word pairs. The study of the word of each pair , generally divided into : 1. Sound and meaning analysis and opinion predecessors when Yin , including the original words and the breeding of sound and meaning of the word , when Yin predecessors and the breeding of the original words and words reflect the situation. 2 . Illustration and Textual , including the original words and word illustration breed , their origin and development of sound and meaning , and some of the previous mistakenly said to be Refutation . Chapter 2: Chinese tone explore several theories of word formation , including the nature of morphological tone , the tone of word formation in the performance of Chinese characters , pitch relationship between morphological and other morphological phenomena , the original words and the breeding of the word, tone classification principles of word formation , the tone of the origin of word formation .