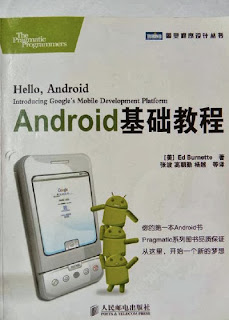 Google's Android is shaking up the mobile market in a big way. With Android, you can write programs that run on any compatible cell phone or tablet in the world. It's a mobile platform you can't afford not to learn, and this book gets you started. Hello, Android has been updated to Android 2.3.3, with revised code throughout to reflect this updated version. That means that the book is now up-to-date for tablets such as the Kindle Fire. All examples were tested for forwards and backwards compatibility on a variety of devices and versions of Android from 1.5 to 4.0. (Note: the Kindle Fire does not support home screen widgets or wallpaper, so those samples couldn't be tested on the Fire.)

Android is an operating system for mobile phones and tablets. It's inside millions of cell phones and other devices, including the hugely popular Amazon Kindle Fire, making Android the foremost platform for mobile application developers. That could be your own program running on all those devices.

Within minutes, Hello, Android will get you started creating your first working application: Android's version of "Hello, World." From there, you'll build up a more substantial example: an Android Sudoku game. By gradually adding features to the game, you'll learn the basics of Android programming. You'll also see how to build in audio and video support, add graphics using 2D and 3D OpenGL, network with web pages and web services, and store data with SQLite. You'll also learn how to publish your applications to the Android Market.

The #1 book for learning Android is now in its third edition. Every page and example was reviewed and updated for compatibility with the latest versions. Freshly added material covers installing applications to the SD card, supporting multi-touch, and creating live wallpaper. You'll also find plenty of real-world advice on how to support all major Android versions in use today.

If you'd rather be coding than reading about coding, this book is for you.
Download
Copy the password