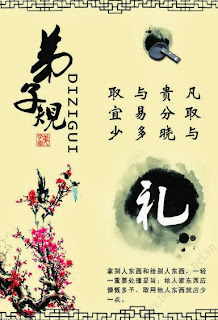 "Rules " This book is second only to the "Three Character Classic " , formerly known as "training Mongolian " [ 8 ] exist, the original author Liyu Xiu Qing Dynasty Emperor Kangxi of the scholar . The " Analects and articles" "disciples be filial , out of the Ti , like the letter , the Pan- loving public , and benevolence , had any energy left , places science text" as the center, is divided into five parts , as detailed described disciple at home , go out , treat , Receiving and learning should abide by the norms of the Code . Later Qing Jia Cunren revised adaptation "training Mongolian " and renamed "Rules " is enlightenment Foster , educational younger Dunlun must keep copies of anti- evil sincere, honest family traditions to develop the best books.
Although remote ancestor worship can not not sincere . Although descendants stupid , can not read through the book . Waste by waste Lun , crime is a problem root causes . Tan Tianchi slow , people degenerate reasons , want to cause peace and harmony , to be started from the basic . Figure harness offense vitality , only Myeongryun filial piety . Basic mistake was Zhimo , considered as the basic Zhimo . In order to solve the problem , and have actually made ​​the problem . Masato Only THIS , since the service Bangguo Ning .
The saying goes : to teach children early child, early to teach children the nature of women is not contaminated before , truthfulness easy entry . Its long without preconceived variable . Enemy of kindness , faith , shall be created when young ; being parents- who , in their children when young , that is, when taught to recite the classics , in order to cultivate their basic wisdom and courage of your convictions ; better to know the reason of retribution , London Lun absolutely per channel . If not taught when young , until grown , then the habit has become, powerless men !
Download
Copy the password