Research and Comparison of Kam and Han Grammar 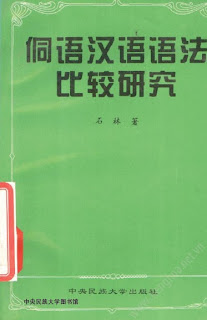 After the founding of the PRC, has trained many minority languages ​​scientists, Shilin gay is one of them. He himself is the Dong people, Chinese also have a profound accomplishment, "written by Dong A Comparative Study of Chinese grammar," a book on the basis of information of course there will be no errors. This is the book's first feature. According to the 1990 census, the population of more than 2.51 million Dong, Dong language is this understanding between members of an ethnic symbol. But Dong and Han, as well as many other ancient peoples concerned are "original Tibetan people," the descendants, now and in the People's Republic of the family of nations to build socialism with Chinese characteristics; Dong people who need to learn the Chinese language As participation in relevant research Dong Dong affairs and culture of the Han people must learn to Dong. According to this view, "Dong language Chinese grammar comparative study" this book is not only an academic writings, but also as bilingual textbooks. This is the book's second feature. To make it easier for language teaching, this book will be selected according to sentence Han, Dong sentences in two languages ​​to be analyzed and compared, and then fishes phrase, word, morpheme analysis. This is the third characteristic of the book.