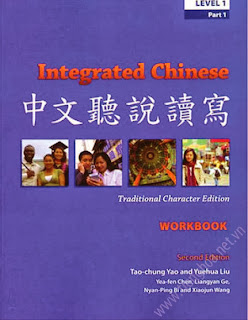 Integrated Chinese 1 is accompanied by a workbook, a character workbook, and CDs with workbook exercises. Both simplified and traditional character versions are available. I found the workbooks to be difficult, but extremely helpful. The workbook CDs are absolutely the best I’ve ever used in any language program. For that matter, I can’t think of a single better workbook for any language course. Maybe the most telling thing is the comparison I saw the first time I left Taiwan to visit home. I met up with some friends studying Chinese in college with the Integrated Chinese series. In 9 months of attending class for 1 hour a day, they knew more characters and had better pronunciation than my friends at Shida (師範大學), who had been living in Taiwan and using the Audio-Visual series for 2 hours of class a day over just as many months. Nearly all of them credited the listening homework sections in the workbook.

I can’t emphasize enough how every thing in Integrated Chinese 1 is useful once you get to China. If you go to Taiwan, like I did, you’ll find a few word usages are different but you’ll still be well understood. Unfortunately, at times the book seems more like it was written for linguists than for 18 year old college students. The phonics section at the beginning was particularly intimidating. I remember that it described the pinyin “x” sound as an “alveolo-palatal fricative”. I had to look up each word in the dictionary to figure out what that meant. On the other hand, the book was very precise and I did figure it out, unlike many people I’ve met who have studied for years and still don’t differentiate their “x” and “sh” sounds very well. The grammar explanations are dry, but thorough. One final thing I’d like to say about Integrated Chinese 1 is that it is NOT an easy textbook work through in the time frame allotted by most colleges. If you work through it in one year in a 5-credit class, I guarantee you’ll be spending at least a couple of hours a day on your homework.
Download
Copy the password