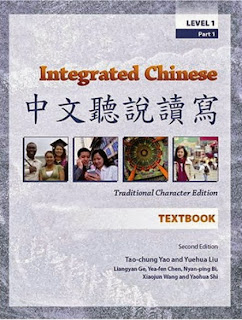 Integrated Chinese 1 (中文聽說讀寫一) is by far the most used introductory Chinese textbook at US colleges. In fact, it was with this book that I began my studies of Chinese as a college freshman. According to the preface, Integrated Chinese uses a modern communicative approach. The book covers about 800 characters, not counting supplementary vocabulary, and is meant to be used for one college school year in a five hour per week class. I’ve never seen the book sold in Asia.

Like most Chinese textbooks, each lesson of Integrated Chinese 1 includes a Chinese dialogue, the same dialogue repeated in pinyin and then English, a vocabulary list, and a grammar section. In my opinion, the approach really isn’t that communicative. It’s just as focused on grammar and translation as any of the old school Chinese texts, such as the Practical Audio-Visual Chinese (視聽華語) series. It certainly isn’t as communicative as the modern Japanese textbooks, such as the Yookoso series. Integrated Chinese is extremely well laid out, though. The dialogues really are useful as spring-boards into class discussion. I think this is the one place where the communicative intent of the authors comes through.
Download
Copy the password