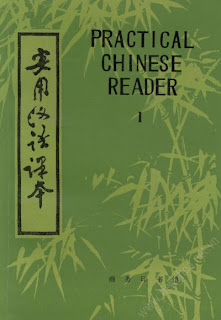 The 'Practical Chinese Reader' series may be old and slightly outdated, but in my experience, such methods can actually be some of the better finds on the market. There is nothing wrong with the vocabulary. The Chinese taught is the modern standard of the People's Republic of China, and the English employed is that of the British Commonwealth. Not particularly a surprise, copyrights to both languages would belong to the Chinese and the English, respectively. The word 'zúqiú' (zú 'foot', qiú 'ball') is based on the word 'football'; the word 'soccer' is primarily American usage. The word 'kèting', which roughly translates to 'guest hall' (the place where one receives guests), has its equivalents in 'drawing room', 'living room', or 'salon' -- all of which refer to the same thing. Some words may have dwindled in usage in the past fifteen years like 'tóngzhì' (tóng 'same', zhì 'will' = comrade), but these are in the minority.

The pronunciation and grammar are impeccably explained and demonstrated. However, the explanations do use a good amount of linguistics terminology, a method seldom used in the United States outside of university level courses.

The 'Practical Chinese Reader' series offers plenty of exercises. In volumes one and two, stroke order charts for newly learned characters are available to guide beginners in correct writing habits. After diligent completion of all six volumes of this series, one will have a solid foundation and a strong command of the Chinese language. One will also have a better understanding of Chinese society through the illustrations of everyday life, common situations, modern Chinese thought, modern Chinese behaviour, and extant Chinese traditions in the dialgoues and reading passages.

There is no propaganda in these books. If the texts seem to contain propaganda, they only reflect the overlooked obvious fact that Communism has permeated all facets of life in China over the last sixty years. These books were composed long before the recent commercial and societal reforms -- both questionably beneficial to China despite Western approval. Moreover, the publisher Commercial Press is a state-owned enterprise.

Indeed, many of the images do recall the 1970s, yet with the retro style trend that began in 1990s, they are now more delightful than distasteful. The typography is excellent. The books were actually typeset by metal press rather than typewritten. While the print quality is not terrible, editions printed in Hong Kong with high grade paper, richer inking, and sturdier binding are available. Such editions might be difficult to find unless one shops on-line or visits a good Chinese bookshop. Better than newsprint despite the appearance, Mainland editions use natural pulp based paper without the bleaching. I have had the original edition for about two decades without a problem with the binding.

Even though audio recordings for 'Practical Chinese Reader' are available, check with a professor to ensure that the audio was produced using native Northern Chinese speakers. The best bet is to make good friends with native speakers from in and around Beijing, Tianjin, and Hebei province. Another good means of practice would be to watch or listen to broadcasts from via satellite television or internet radio. Chinese Central Television and China National Radio generally employ presenters and performers whose Chinese is exemplary. In addition, DVD issues of well-produced dramatic television serials ('telenovelas') from China are now widely available with ample dialogue, scenes of historical and contemporary life, and subtitles in Chinese for those who need them (non-speakers, the deaf, and students).

Be warned that members of the overseas Chinese communities might not be good barometers for comparing your progress since the majority of them come from areas that do not naturally speak Northern Chinese. Some may be from areas that speak a highly mutated form of it from inundation by Southern Chinese languages. Moreover, the level of language that these books teach might be more elevated, cultured, and intellectual in flavour than one would encounter from overseas Chinese, many of whom were not raised or educated under the PRC system.

Overall, I highly recommend this series as one of the best ways to begin studying Chinese and to build a solid foundation in the language. Along with a good dictionary, a guide to master handwritten Chinese ('Learn to Write Chinese Characters' by Johan Bjorksten, published by Yale University Press, is spot on), and a few Chinese friends, the 'Practical Chinese Reader' series should do nicely for linguistic success.
Download
Copy the password