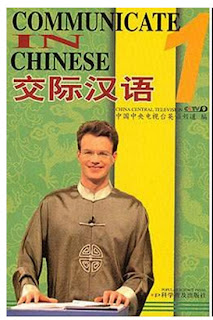 CCTV 9's Communicate in Chinese is unquestionably the most comprehensive, comprehendible approach to learning Chinese language and culture available anywhere in the world today. The same titles of the four books (CCTV 9's texts), and corresponding DVDs (CCTV 9's videos), makes this the most flexible and adaptable program to your personal learning style and needs, and to the technology available around you throughout the day. The textbooks and DVDs allow you to master speaking and listening skills and give you more options of mastering reading and writing skills.

Communicate in Chinese is a user-friendly and engaging learning program for Chinese language students from a newbie to an advanced learner who may have even lived and worked in China.

This learning package is adapted from the twice-daily aired television program seen on China Central Television (CCTV) Channel 9, the English Channel, all over China to help foreigners learn to speak Chinese. The Canadian compere, Mark Rosewell also known as Dashan, is the most popular, well known, and beloved "foreigner" in China. He is heir "foreigner equivalent" of Bob Hope, having appeared and starred in movies, stand-up comedy, and many types of Chinese language television programming. His own mastery of Chinese is far beyond that of many native Chinese speakers. "Communicate in Chinese" uses many native Chinese speakers in its skits and dialogues, which were filmed on the streets, at schools, and at businesses and community settings. In addition to the many excellent native speakers, westerners who are living and studying in China also take part in presenting the lessons.

The "Communicate in Chinese" texts have 40 scenarios (40 topics) in total, published as a set of four volumes of books, and corresponding audio-visual materials, each book comprises ten lessons, the last one being a review lesson. The publications are available for: 4 books of texts, and 12 DVD discs of videos broadcasted by CCTV 9.