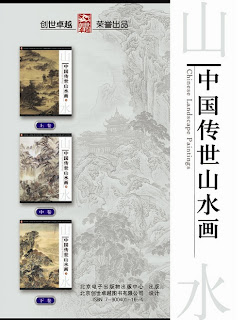 Many critics consider landscape to be the highest form of Chinese painting. The time from the Five Dynasties period to the Northern Song period (907-1127) is known as the "Great age of Chinese landscape". In the north, artists such as Jing Hao, Fan Kuan, and Guo Xi painted pictures of towering mountains, using strong black lines, ink wash, and sharp, dotted brushstrokes to suggest rough stone. In the south, Dong Yuan, Ju Ran, and other artists painted the rolling hills and rivers of their native countryside in peaceful scenes done with softer, rubbed brushwork. These two kinds of scenes and techniques became the classical styles of Chinese landscape painting.

Beginning in the Tang Dynasty, many paintings were landscapes, often shanshui ("mountain water") paintings. In these landscapes, monochromatic and sparse (a style that is collectively called shuimohua), the purpose was not to reproduce exactly the appearance of nature (realism) but rather to grasp an emotion or atmosphere so as to catch the "rhythm" of nature.

By the late Tang dynasty, landscape painting had evolved into an independent genre that embodied the universal longing of cultivated men to escape their quotidian world to commune with nature. Such images might also convey specific social, philosophical, or political convictions. As the Tang dynasty disintegrated, the concept of withdrawal into the natural world became a major thematic focus of poets and painters. Faced with the failure of the human order, learned men sought permanence within the natural world, retreating into the mountains to find a sanctuary from the chaos of dynastic collapse.
Download
Copy the password