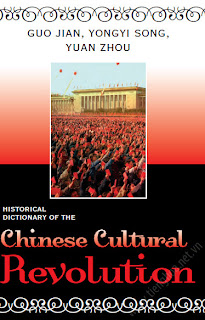 The Cultural Revolution in the People's Republic of China started in 1966 and lasted about a decade. This revolutionary upsurge of Chinese students and workers, led by Mao Zedong, wreaked havoc in the world's most populous country, often turning things upside down and undermining the party, government, and army while simultaneously weakening the economy, society, and culture. Tens of millions of people were killed, injured, or imprisoned during this period and relatively few benefited, aside from Mao Zedong and the Gang of Four, the group that would eventually receive the blame for the events of the Cultural Revolution.

Given the turbulence and confusion, it is hard to know just what happened. The Historical Dictionary of the Chinese Cultural Revolution tackles this task. First, in an extensive chronology, which traces the events from year to year and month to month, then in an introduction puts these events in context and helps to explain them. But most importantly, the bulk of the information is provided in a dictionary section with numerous cross-referenced entries on important persons, places, institutions, and movements. A bibliography points to further sources of information and a glossary will help those researching in Chinese.
Download
Click the button below to copy password